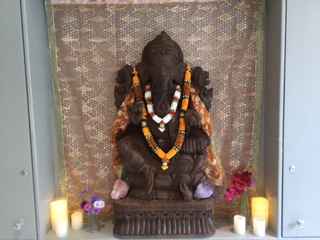 We are often asked why have a Ganesh.

With an elephant head and a round potbelly, Ganesha is perhaps the best known of the Hindu deities and is notably known as the “remover of obstacles”.
He also resides over the realms of wisdom, luck and writing.

Not surprisingly is the first deity to turn to, in dire times.

Traditionally, any shubh karya (auspicious work or activity) in Hinduism is begun with an invocation to Lord Ganesh. This ritualistic practice is an indicator of the fact that Ganesh is the most popular of the numerous gods in the Hindu pantheon. It is not just thanks to his lovable image that appeals, but his devotees find a vast treasure trove of symbols and feel blessed when meditated on.

The numerous stories of Ganesh, and love for his parents, Shiv and Parvati, are meant to teach that experience deserves respect, especially in the form of ones parents and guardians.
Ganesha is supposed to have two wives, Siddhi (success) and Riddhi (prosperity). The symbolism means that if one walks on the path set by Ganesh, success and prosperity are bound to be always by ones side.
It is difficult to miss the fact that Ganesh is one very unusual god. For one, devotees seem to find him the most approachable.
Is it because of his elephant head?
Is it because He is fat, not fit?
The devotion bestowed on Him despite His seeming imperfections may serve us a lesson—that of accepting others just as they are.

The physical attributes of Ganesha are themselves rich in symbolism

May his presence bring his characterized blessings to the Studio and visitors alike,